In her December 13th article for The Raw Story, “A Plea: Remember Beyonce’s Record Is Art, Not A Political Treatise”, freelance journalist Amanda Marcotte — who writes on feminism, national politics, and pop culture — tackles the accusation that Beyoncé’s album is “anti-feminist” (referencing reactions to lyrics like “bow down, bitches”) by reminding us that Beyoncé has produced for us a work of art, not one of politics.  Because if we look closely, her politics are flawed, or so the argument goes.  Marcotte faults Beyoncé for “reinforc[ing] the same beauty standards she decries on the records”, but ultimately concludes that Beyoncé is still a feminist because, you know, feminism is messy.  Marcotte ends the piece in (what she claims is) a “plea” that not only fails to understand Beyoncé’s feminism, but also functions to silence the Black radical politics of Beyoncé’s work:

I want to remind everyone that music is not a polemical or a campaign pamphlet. Music is art. Art can—should—be messy, contradictory, raw, and emotional. I love that Beyonce openly struggles in her music and in her image between the push-pull of both wanting to embody this kind of feminized perfection and seeing it for the trap that it is. It’s much more honest and human and humane than some kind of bland feminist treatise set to a beat. Beauty is a painful trap to ensnare women, but beauty is also pleasure and it draws you in. Denying these contradictions and presenting ourselves as people who have it all figured out all the time is tempting, but it’s not honest. And it’s certainly not art, which is supposed to reveal, not conceal. Just a small plea from me to remember that we’re talking about an art form, not a political treatise, as we tear into the lyrics, beats, and imagery that Beyoncé just turbo-launched into the public.

In one short paragraph, Marcotte manages to remind us why white feminism fails (still) to address the experiences of Black women as women; and in the same stroke, disaffects us — as a viewing public — from our identification(s) with Beyoncé as a woman of color.  As an ideology, (white) feminism demands that women identify (and rally) as women first, and as bodies of color second, or better yet, last.  Marcotte forecloses on the overdeterminacy of Blackness in an anti-Black world, and underestimates Beyoncé’s commitment to (what I am going to suggest here is) an insurgent, Black political future.

Beyoncé’s radical politics are perhaps best expressed in SUPERPOWER, the music video for a song she sings with Frank Ocean.  In it, Beyoncé directs a diverse band of women to commit righteous acts of arson and property damage.  Her co-conspirators consist of freaks, monsters and degenerates; she celebrates fearless, violent women: veiled women, Black women, as well as several women who present as gender ambiguous and body dysmorphic.  In the last two minutes of the video, these women women are joined by their male comrades and a cadre of Black musicians — Kelly Rowland, Michelle Williams, Luke James, and Pharrell — and together they march to meet the riot police that awaits them.

The affect produced by this video is telling: the men and women who make up the crowd are wearing baseball caps that read “LEGAL” and (in graffiti) “CHAOS”.  Likewise, the beautifully-produced music video is cut with grainy black-and-white camera footage invoking first-hand accounts of a street riot.  And the closing scene is haunted by Beyoncé’s lyrical reassurance that, if they stand together, “they [the state] can’t break us down”; as well as an insurgent appropriation of Obama’s 2008 campaign slogan, “Yes, we can!”.  Hers is a call for global insurrection on all fronts; and better yet, a violent insurrection with Black musicians at the helm.

Marcotte is wrong to dismiss the politics of Beyoncé’s music, because it is precisely the political nature of Beyoncé’s art that makes her Black feminism unintelligible to a white audience in the first place.  To quote the folks over at The Crunk Feminist Collective,

Academic feminism ain’t the only kid on the block. …Newsflash – everybody didn’t go to college. So when women of color start waxing eloquent about how our grandmothers and mothers were the first feminists we knew and many of them would “never” use the term, I wonder then why we don’t understand Beyonce’s homegrown brand of feminism – one that honors female friendships, one that recognizes and calls out sexism and domination in her industry, one that celebrates the power of women. No, it ain’t well-articulated radical social justice feminism, but if you need a Ph.D. to be a feminist, then we’ve got bigger problems, folks. AND I’ll take a feminist that knows how to treat her homegirls before one who can spit the finer points of a bell hooks to me all day erry-day.

The differences between “white” (or academic) feminism and “black” (or homegrown) feminism matter: Beyoncé’s politics entertain the dream of an insurgency that might change everyone’s lived conditions; while white feminists are (usually) only interested in agitating for issues that affect them directly.  The concerns of mainstream white feminism fail (still) to address the fact that Black women are being gratuitously killed by the state.  Or that they are being criminalized, imprisoned, and forcefully separated from their children.  Or that their children are being stopped, frisked, and interrogated like criminals and, if need be (or the wind blows in the right direction) shot and killed with impunity.  Or that Black women and their families are being starved out by the War on Poverty and the newest bout of rants in Washington about ‘freeloading’ Black welfare queens.  Or that Black lives were never worth a damn in the first place.

Beyoncé’s insurgent aesthetics map seamlessly onto the otherwise-soulful, romantic lyrics she offers, suggesting that the music video is intended as a love letter to Black radical insurgency.  This metaphor is reinforced by Beyoncé’s love interest in the video — a masked freedom fighter — who she shields from violence with her embrace, but whose face and identity are never revealed. 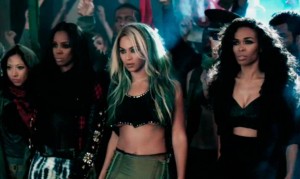 Beyoncé’s music is a political treatise, just not one that Marcotte can understand.  The music video for SUPERPOWER concludes with insurgent rebels lunging at the riot police, only to stop dead in their tracks seconds before impact.  The video abruptly ends there, before the moment of confrontation between the state and the bodies it has abandoned; leaving us to wonder what will transpire when the mass of bodies Beyoncé has collected actually meet the ruling fist of the state.  But perhaps that’s exactly the point: to prod us into thinking about the impossible possibility of a radical confrontation between the state and its people; one in which the odds are always stacked against us, but we persist anyway.  (It really is a tough love.)  The occult nature of this ending refuses to provide closure to the story of a revolutionary violence that, to borrow from Frantz Fanon, is also a cleansing and a transformative violence; one that will even out the score of anti-Black racism to guarantee Black privilege in an anti-White world.

I have a “plea” for Ms. Marcotte that might rival her own: Beyoncé is not a confused young woman struggling with body and self-image issues that she is working through in her music.  She does not need your guidance or patronage in her efforts to come into her own.  She’s already IN her own, and perhaps it’s time to entertain the idea that her arrival is what scares you, because — as Beyoncé made clear by the “secret” release of her new album — you can’t anticipate it.

13 thoughts on “Reading Beyoncé’s SUPERPOWER as a love letter to BLACK RADICAL INSURGENCY: An open letter to white feminists who want to remind us that Beyoncé’s music is just “art””