I was turned on to this petition by a “friend” from high school (I use the word “friend” loosely because I grew up behind the Orange Curtain, and don’t consider my high school peers to be comrades in arms), who was soliciting signatures on her Facebook page; or perhaps circulating the petition in an attempt to mock Kanye West’s reputation as an “idiot savant”.

The request that Kanye, as a Black person, confirm his intelligence (and more specifically, his claim to human intelligence by way of an always already racially biased I.Q. test) to a white supremacist audience — in a country with slave owners as “founding fathers” — reeks of scientific racism; which (as we all well know) is supposed to be a thing of the past: a dirty secret we don’t like to talk about as post-racial Americans with a Black man in the White House (a president who, it must be said, identified in the 2010 census as “Black” despite his mixed race, claiming that he “self-identif[ies] as African American” because “that’s how [he is] treated and that’s how [he is] viewed”).

The wording of this petition is also curious; it claims that the people — which people? — “need by right of [Kanye’s] incessant claim to such title, proof that he is said ‘genious.'” The existence of this petition — though (at the time in which I write this) it has only 6 signatures (and yes, I recognize the political consequences of re-circulating the petition in this critique) — goes to show that Kanye really is the new slave of a world (order) hell-bent on his erasure and the erasure of those people who look like him. 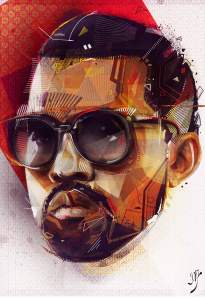 I’m less concerned with the success of this petition or the number of signatures it accrues than I am with the impulse to draft a petition like this in the first place; and more generally, to make this demand of Kanye, a formidable artist in his own right. When entertainers make artistic or politically-charged statements as an extension of their brand or name — as white performers like Lady Gaga (or Brittney Spears before her, or Madonna before her) often do with impunity — they shouldn’t be forced to bear the burden of proof. Performance art is intended to provoke its audience, not to be taken literally (Madonna was obviously not a virgin); and for white artists, the message behind their art is rarely (if ever) literally interpreted. Indeed, I wonder why a petition has not circulated yet to qualify Lady Gaga’s implicit claim that she is a pop genius, and not a capitalist profiteer appropriating radical aesthetics in the interest of her own fame and fortune (an accusation that often gets thrown Kanye’s way).

I’m inclined to think that Kanye is being asked to quantify his intelligence not just because he has claimed on multiple occasions that he is a “genius”, but because he actively voices the urgent concerns of the Black community (often to the disservice of his own credibility in the mainstream). In contrast to his BFF, Jay-Z, Kanye has taken an unapologetic political position in opposition to white supremacist America. As Michael Arceneaux notes in his December 17th article for Esquire, Kanye “is the only person of his clout actively using his platform to speak on the frustrations that come with being a [B]lack creative [genius].” It’s no wonder that the weight of his intelligence is being put under a microscope: it’s because what Kanye is telling us about gratuitous racial inequality rings too true, it hits too hard, it attracts too much attention; Kanye is getting too “uppity”, and must be discredited — at a genetic level.

It must also be noted that I.Q. is not a comprehensive measure of intelligence; there are other forms of genius, not to mention intelligence, which are not quantifiable in standardized form (or quantifiable at all). The I.Q. test is also a racially-biased exam with a fraught history. In the 1920s eugenicists argued that racial disparities on I.Q. tests — which measure economic, social, and political capital (i.e. cultural knowledge and English literacy) as much as they do “intelligence” — were evidence of an evolutionary model of the human race: one in which the Black race is biologically inferior to the white, Anglo-Saxon race, and really, to all other human races (because, as Afro-pessimists have successfully argued, the Black body is intentionally excluded from the guarantees of a Humanist discourse).

The effects of the eugenics movement need no reminder. It was the eugenicists of the United States that inspired Hitler’s dream of a racially-pure Aryan nation; and though we are quick to point out the moral cruelty of Hitler’s political agenda, many of us have willfully forgotten America’s role in providing Nazi Germany with the ideology it used carry out the Holocaust. We have also forgotten that America attempted the same kind of racial cleansing when it forcefully sterilized Black women; but this second forgetting is intentional, because black lives were never worth a damn in the first place, and because in the aftermath of the civil war, Americans were under the impression that Black folk would die out (or more specifically, be starved out). We must remember, in the haunting words of Audre Lorde, that “we were never meant to survive” (The Black Unicorn: Poems, 1995).

In his May 13th article for The Atlantic, Brink Lindsey reminds readers that “there is no such thing as a direct test of general mental ability. What IQ tests measure directly is the test-taker’s display of particular cognitive skills: size of vocabulary, degree of reading comprehension, facility with analogies, and so on. Any conclusions about general mental ability are inferences drawn from the test-taker’s relative mastery of those various skills.” Lindsey goes on to note,

This, then, shows the limits to IQ tests: Though the tests are good measures of skills relevant to success in American society, the scores are only a good indicator of relative intellectual ability for people who have been exposed to equivalent opportunities for developing those skills – and who actually have the motivation to try hard on the test. IQ tests are good measures of innate intelligence–if all other factors are held steady. But if IQ tests are being used to compare individuals of wildly different backgrounds, then the variable of innate intelligence is not being tested in isolation. Instead, the scores will reflect some impossible-to-sort-out combination of ability and differences in opportunities and motivations.

Lindsey’s observation about the racial disparities of I.Q. testing are not new; which is perhaps why I am responding so passionately to the resurgence of the I.Q. question in the context of a petition to discredit Kanye’s genius. There are two problems with the throwback to I.Q. testing as a way to quantify Kanye’s intelligence: creative intelligence cannot be measured by a standardized test (because creative genius, by definition, is the ability to think outside of the box); and further, Kanye’s intelligence (as a Black man who grew up with relatively fewer privileges than most Americans) cannot be assessed in an exam geared towards those people who were born and bred for “success in American society”.

To say that we no longer believe in race as a genetic concept (as the eugenicists understood it) is a ruse; because the technologies of scientific racism — like the technologies of lynching (i.e. Trayvon Martin’s gratuitous murder, or Oscar Grant’s, or Renisha McBride’s) and of Blackface minstrelsy — are changing with the times; but their logics, steeped in white supremacist ideology, remain the same.